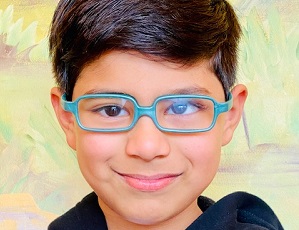 Vikram Konkimalla (Tiny Tim/Child 1) made his theatrical debut in 2019 as Tiny Tim in Goodman Theatre’s production of A Christmas Carol. He is passionate about theatre and has performed in several plays and musicals at his school. Outside of acting, Vikram is a singer, pianist, artist and dancer with training in areas such as tap, hip-hop, gymnastics and tumbling. He is also a talented speed stacker who has participated in tournaments and competitions like the 2019 AAU Junior Olympics, where he earned a Junior Olympic medal in the 8 and Under category. Vikram appears in the book Let’s Meet Chicago: Real Kids in the Windy City, a compilation of interviews with children in the city. A third grader, Vikram’s favorite subjects include Math, Geography, Science and Drama.