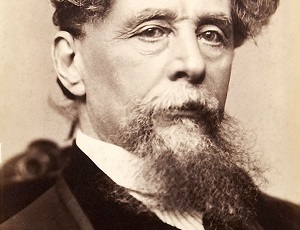 Charles John Huffam Dickens was born on February 7, 1812 in Portsmouth, England. He was the second child of John and Elizabeth Dickens. Dickens’ father was a Naval Pay Officer, whose salary should have been enough to support his family, but, as notes Charles Dickens’s biographer Fred Kaplan, “He was thought careless with money, irresponsible about work, and too eager to enjoy the pleasures of conviviality.” Eventually, on February 20, 1824, John was sent to debtor’s prison. His wife and children, with the exception of Charles, joined him in the Marshalsea Prison. Charles, only 12, was taken out of school and put to work at Watren’s Blacking Factory where he pasted labels on bottles for six shillings a week. To keep his job, Dickens was forced to live in a dreadful attic room infested with rats and other vermin. When his father was released from prison, Dickens was allowed to return to school at the Wellington House Academy. However, his experiences at the Blacking Factory would haunt him all his life and they would not be exposed until later in David Copperfield (1850) and Great Expectations (1861), works that dealt with themes of alienation and betrayal. After three more years of formal education, Dickens left school to accept employment as an office boy for an attorney. This job led to him becoming a free-lance reporter at Doctor’s Commons Court in 1829. By 1832 Dickens had moved his way up to becoming a shorthand reporter of Parliamentary debates in the House of Commons and in 1834 he worked as a newspaper reporter, adopting the pseudonym “Boz.” Dickens published a series of sketches of London life followed by the serial novel The Pickwick Papers (1837), which became an enormous popular success. During the 1830s not only did Dickens gain notoriety but he also became engaged and married Catherine Hogarth on April 2, 1836. After his success with The Piclcwick Papers, Dickens focused his efforts on becoming a novelist and produced such noteworthy early works as Oliver Twist (1838) and Nicholas Nickleby (1839). In 1842 he went to Canada and America to advocate international copyrights to prevent pirated copies of his books. Although he had tremendous success with his first few novels, pirated copies of his work were hurting him financially. In that same year Dickens was disturbed by a report on the plight of child mine workers. Remembering his own childhood, he became very interested in education as a tool to help the poor, especially children. In 1843 he visited a series of “ragged schools” in England that taught working class children. Although encouraged by the school’s goals, Dickens was appalled by the filthy conditions to which these children were subjected, and he decided to become an advo­cate for children. He originally intended to write a magazine article about the “ragged schools,” but times were tough because England was in a depression and Dickens was struggling finan­cially. His sales from the monthly installments of his novel, Martin Chuzzlewit (1844), were not going well, and he needed money to support his growing family. Keeping the “ragged schools” in mind, Dickens was inspired to write a Christmas story that he thought would secure him finan­cially. Dickens wrote to his friend Professor Felton about how he was affected writing his story. “Over which Christmas Carol, Charles Dickens wept, and laughed, and wept again, and excit­ed himself in a most extraordinary manner in the composition; and thinking whereof he walked about the back streets of London fifteen and twenty miles many a night when all sober folks had gone to bed.”

Dickens never imagined the impact A Christmas Carol would have and how it would become a holiday tradition. A Christmas Carol was a popular success and although he profited very little from it at first, in time he would earn quite a bit of money from the story. Shortly after its publi­cation late in 1843 Dickens was quoted as saying, “By every post, all manners of strangers write all manners of letters about their homes and hearths, and how the same Carol is read aloud there, and kept on a very little shelf by itself. Indeed, it is the greatest success, as I am told, that this Ruffian and Rascal has achieved.”

A Christmas Carol was the most successful book of the 1843 holiday season. By Christmas it had sold six thousand copies, and eight stage adaptations were in production within two months of the book’s publication. With his success in 1843 Dickens resolved to write a new Christmas story every year, and with the exception of 1847, from 1844 to 1867 he did just that. These sto­ries included The Chimes (1843), The Cricket on the Hearth (1845), The Battle of Life (1846) and The Haunted Man (1848). Although they were well received, none of the new stories matched the enduring charm of the first.

Dickens never forgot his humble beginnings. He continued as a social reformist in his later years, championed the rights of children, the abolishment of slavery and reforming the living conditions of the poor.

He gave many brilliant public readings from his novels and toured with them across the globe until his death on June 8, 1870, when he suffered a stroke at the age of 58. He was buried in Westminster Abbey on June 14. The London Times ran a eulogy on June 11, 1870, which said, “He was of the people, and lived among them and caught with an intuitive force and fullness their daily life.”